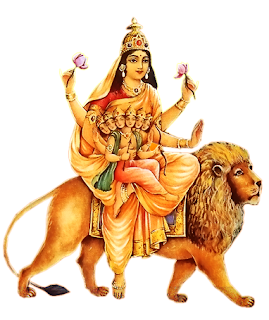 Skandamata is the fifth form of Hindu Goddess Durga. Her name comes from word, Skanda is another name for war god Kartikeya and Mata is the term for mother. As one of the Navadurga, Her worship takes place on the fifth day of Navaratri ( the nine divine nights of Navadurga).
The legend of Skanda is found in the Skanda Purana. Shiva and Parvati's energy combined into its own devine form when the two meditated. Indra came to know about this and assigned Lord Agni(Fire) to steal the ball of energy and keep it safe from Demon Tarakasur. Agni snuck in the cave and took the energy by deceit and lies in his hands. After meditation, Parvati realized that Lord Agni took the divine energy and chased after him. Lord Agni vanished with the divine energy and ran to Goddess Ganga. Meanwhile, Parvati came out of the cave and asked Gods why Lord Agni stole the divine energy. Gods answered her that they had to keep it safe from Demon Tarakasur. Parvati got angry and attained the form of Goddess Durga, cursed the Gods that their wives would never be able to enjoy happiness with their children and cursed Lord Agni that he would be an all-burner, unable to differentiate the differences between right and wrong, and that his food would have impurities, that he would always be surrounded by black smoke and that anyone who touched him in any one of the three worlds would reduce to ashes. Meanwhile, Shiva came out of the cave and placated her. Later, Shiva's son Kartikeya (or Murugan or Skanda) had taken birth from the six Kritikas(Mothers) and not Parvati. Nonetheless, the Goddess had accepted him as her own child, setting an example of being a great mother before the world. She took back Kartikeya, from Kritika Lok(Kritika world) to Kailash while riding Lion in her Durga form. As he grew, he learned about the boon given by Lord Brahma to Tarakasur that he could only be killed by Kartikeya. The Gods had given Kartikeya special powers and weapons, and Shiva and Parvati encouraged him to kill Tarakasur in the battlefield. Before Kartikeya left for the great battle, Parvati transformed herself as Goddess Durga again to bless him. With Parvati's(Goddess Durga's) blessings, he killed Tarakasur and his army. He was made the commander-in-chief by the Gods.
Newer Post Older Post Home